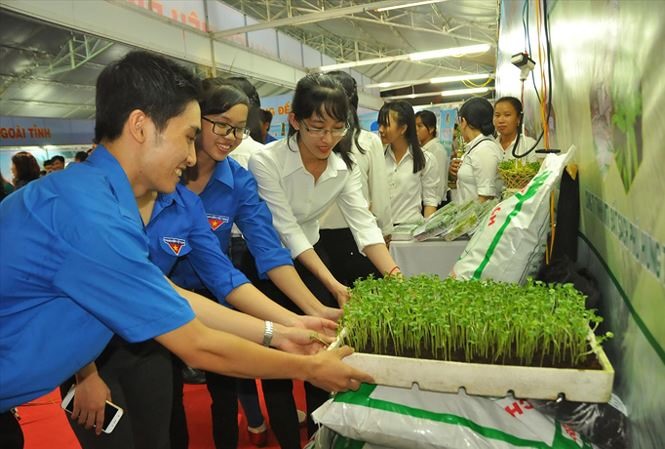 BẾN TRE — Many small, new businesses in the Cửu Long (Mekong Delta) province of Bến Tre have grown big and started to build value chains for local products thanks to the local government’s efforts to promote entrepreneurship.

Phú Hưng Thịnh company for instance, established under the province’s start-up initiative in 2016, has now emerged as a producer of farming products made from coconut and cow manure.

“I want to turn waste into valuable products and sell to other provinces and even abroad,” Phan Gia Thịnh, the founder and owner of the company, said.

The company now sells potting mixture made from coconut coir and vermicompost (worm composting) to around 10 cities and provinces.

Explaining the reason for choosing coconut coir as the main ingredient to produce clean potting mixture, the 24-year-old said simply: “Because it can be found easily in my hometown, Bến Tre Province.”

Besides adding value to local coconuts, Thịnh is also now making fertilisers from cow manure to create a value chain from cows.

He has tied up with co-operatives in Ba Tri District, where there are more than 77,000 cows, to buy manure from 150 small farmers and composts it.

Nguyễn Văn Lai, 60, a farmer in the district’s An Hiệp Commune, said earlier he had to compost cow manure by himself and sell it often for VNĐ6,000 (26 US cent) per sack, but now Thịnh buys manure from him and other farmers at VNĐ8,000 (35 US cent).

So joining the programme was a no-brainer, he said.

Phú Hưng Thịnh’s success could not have come so quickly without the support of the province government, which is very keen on its start-up programme.

It launched the Đồng Khởi Start-ups and Develop Enterprises programme in 2016 to promote entrepreneurship as an effective means to boost economic growth and eliminate poverty.

It established a fund under the programme with funds mobilised from the private sector. It now has around VNĐ12 billion ($523,000).

Lê Xuân Vinh, director of the province’s investment promotion and start-up centre, said the non-profit fund is operated by enterprises, and the province’s role is limited to helping promising businesses access money from it.

“There are various types of financial aid such as non-refundable grants worth millions of đồng to help entrepreneurs make prototypes and low- and zero-per cent-interest loans.”

Besides, the province is also looking at bigger donors to fund start-ups. For instance, it has connected Phú Hưng Thịnh company with the Adaptation in Mekong Delta (AMD) project in Bến Tre since it has a public-private partnership (PPP) fund that gives financial aid to local businesses.

Vinh said: “Right after the province’s start-up programme began, we connected with AMD. If we see a business that meets AMD’s criteria, such as adapting to climate change and generating jobs for locals, we will help it access the PPP fund.”

Funding is only one part, with the province also organising training courses in financial management, writing business plans and marketing to improve the capacity of local entrepreneurs, he said.

“We make it easy for young people who have business ideas to consult entrepreneurs from big companies and learn from their success.”

Admitting that the start-up scenario in Bến Tre City is more vibrant than in other districts, especially in remote areas, he said the province has been working with districts to organise district-level start-up competitions.

From these competitions, good ideas would be selected, improved and sent to the province’s annual start-up competition, he said.

“But the main purpose of the competition is not to choose winners but to help nurture good business ideas and build them into businesses.”

Notably, many university graduates working earlier in big cities have returned home to set up companies and some even started businesses when still in college, he said.

“These young people have helped commercialise local products, and they are changing the start-up landscape of the province.” — VNS